The 6th annual UMass Life Sciences Graduate Research Symposium will be held on Friday, December 2. The event brings together graduate students from all areas of life sciences research at UMass to present their work in both talks (9:00 am-5:00 pm, Life Sciences Laboratories Building, Room S340) and a poster session/reception (5:00-6:00 pm). This event is open to everyone who wants to learn about the fantastic life sciences work going on at UMass! The schedule for presentations is available on the LSGRC website. 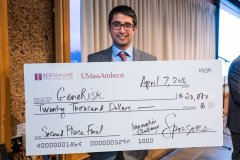 Fourth-year NSB student, Ajay Kumar, received second-place honors in the 2016 UMass Innovation Challenge Finals that took place on April 7. Ajay accepted the award for GeneRisk, the software service he founded. GeneRisk allows medical clinicians to detect neurodevelopmental disorders, such as early indicators of autism. Medical professionals extract a patient’s saliva sample, which they send to a laboratory for gene sequencing and diagnosis. According to Kumar, to date, diagnosis of such disorders has relied largely on questionnaires and trial-and-error treatment, despite advances in understanding complex genetic disorders.

Coordinated by the Berthiaume Center for Entrepreneurship, an initiative that promotes entrepreneurship across the UMass Amherst campus, the multi-stage Challenge, in its culminating event of the year, featured six student teams that vied for $65,000 in awards. Each finalist presented a three-minute project description, followed by twelve minutes of probing questions from the competition’s six judges.

NSB doctoral student Amanda M. Cremone writes about her sleep research into whether children with attention-deficit hyperactivity disorder might benefit from longer periods of sleep. One key area of inquiry is whether extended sleep in children with ADHD might reduce their impulsivity, she says.

In 2015 the SBN selected Annaliese Beery as the recipient of the Frank A. Beach Award for early career accomplishment. Dr. Beery received her B.A. from Williams College and PhD from the University of California, Berkeley, and was a postdoctoral fellow at the University of California, San Francisco. She joined the faculty in Psychology, Biology, and Neuroscience in 2010, where she currently serves as an Assistant Professor. Her work combines modern molecular neuroscience within the context of a strong evolutionary perspective, and has yielded important insights into the neurobiology that mediates differences in social behavior and stress reactivity.

This 5-year award, "Testing a unified theory of perception and memory in the medial temporal  lobe," for approximately $600,000 will allow Professor Cowell to develop and test a theory of how memory interacts with high-level visual perception and why both of these cognitive functions depend upon the medial temporal  lobes. By applying the theory to both amnesia caused by brain damage and the more moderate memory loss caused by normal aging, this project will investigate whether these two forms of memory loss can be expained by the same mechanisms. This research will employ studies of memory performance, functional magnetic resonance imaging (fMRI), and computational modeling.

Neurobiologist Gerald Downes, with chemist James Chambers at the University of Massachusetts Amherst and Amherst College neurobiologist Josef Trapani, have been awarded a three-year $824,025 collaborative research grant from the National Science Foundation to study the zebrafish brain to better understand how neurons regulate locomotion. Downes, the lead investigator, says his ultimate research goal is to better understand how different chemical signals, called neurotransmitters, work together at cellular and molecular levels to coordinate normal locomotion such as walking and swimming. Read more

REMOTE SEMINAR
Memory and time in the hippocampus