Curator of Curator of Amphibians and Reptiles , NaturalHistory Collections

Virtually all of the New England flora and fauna was erased during the last glaciation. All of the animals and plants that now populate the region have become established since the last glacial recession began, about 17,000 years ago. The relatively low species diversity and the recent re-colonization of the region makes New England a particularly good area for the study of amphibian populations and their phylogeography.

During the last 200 years New England amphibians and reptiles have been studied by many noted naturalists: Storer, Thompson, Allen, Linsley, Agassiz, Babcock, and a host of more recent researchers and naturalists. Although a few of these researchers gathered natural history data, most simply catalogued occurrences and distribution of the amphibians and reptiles of the region. Even so, using their information we can comfortably state that throughout 7000 years of human occupation not a single species of amphibian or reptile has been extirpated from the region. Unfortunately we can be equally certain that many species have suffered enormous declines during this period. Of the 44 species of terrestrial amphibians and reptiles found in Massachusetts, 18 are listed as state rare.

Massachusetts has the most aggressive state rare species laws in the country. One, the state Endangered Species Act, not only protects the organisms but also their habitats. Unfortunately biologists still do not understand basic life history strategies and biological requirements of many of the Commonwealth's rare amphibians and reptiles. Before the full power of the state's Endangered Species Act can be enforced, biologists need answers to such basic questions as: how far do adults migrate from nesting habitat; how large is an individual's home range; and how large an area needs be preserved to maintain a long-term viable population?

I have three equally important goals as a herpetologist. My first is to instill in future generations of biologists an enthusiasm and understanding of herpetology. This is accomplished by offering a classical, upper level course in herpetology. The lecture portion of this course provides an overview of the anatomy, evolution, systematics and behavior of the major living lineages of amphibians and reptiles, with a special emphasis on the herpetology of Eastern North America and New England. The laboratory portion of the course is organized around three approaches: anatomical studies; studies of live organisms; and studies of regional and global amphibian and reptile diversity. Collateral support for this lab requires the maintenance of a large assemblage of living amphibians and reptiles as well as an extensive collection of preserved and osteological material.

My second goal is to better understand the natural history of amphibians and reptiles within Massachusetts. With a better understanding of specific life history requirements of various rare species, state agencies will be better able to identify and protect critical habitat thus ensuring the future well being of these animals.

My third goal is to try to understand phylogeography of amphibians and reptiles within the New England Geographic Province. Because all species of amphibians and reptiles were extirpated from New England during the last ice age, this goal essentially asks how did the current species re-colonize New England after the last ice sheet receded? I am interested in learning whether species now found in New England returned from southern and western refugia or if other refugia provided nuclei for repopulation. Many researchers have speculated about this, but solid evidence of multiple refugia has been difficult to obtain. With the simplification and sophistication of modern DNA analysis it will be possible to compare various populations within a given species and determine possible pathways of recolonization. This truly is an exciting time to study herpetology in New England. 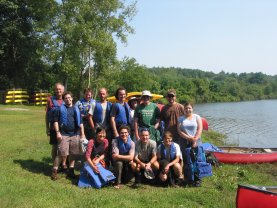