I am a biological anthropologist interested in human evolution in general, and in the ways humans adapt, biologically and culturally, to their environment. One of my research interests has been on the relationship between physical activity and postcranial skeletal robusticity as a means of inferring behavior in past populations. I was able to show, for instance, that in Upper Paleolithic populations from Europe, there is a marked decline in lower limb robusticity in the latter part of the Upper Paleolithic, after the Last Glacial Maximum (around 18,000 years ago). This confirms archeological evidence of decreased mobility during that period. An ongoing project (the European Project) focuses on the evolution of postcranial robusticity in Europe from Upper Paleolithic to the present, in an effort to answer questions such as: Why do Europeans have such high rates of osteoporosis and fractures? What role does decreased physical activity play in this? When did the major changes occur? What role did factors such as agriculture, social inequality, division of labor, mechanization and industrialization play? Another research interest centers around the origins of modern humans. Since 2002, I, along with colleagues from Duke University, University of Pisa (Italy) and Arizona State University, have been excavating the site of Riparo Bombrini (Liguria, Italy, a rockshelter that preserves Middle Paleolithic (Mousterian) and Upper Paleolithic (Aurignacian) layers. The main of this project has been to clarify the transition between Neandertals and modern humans. 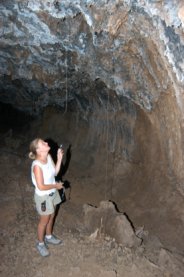