My research focuses on explaining the patterned complexity of songbird vocalizations.
Songbirds produce sounds of unparalleled acoustic complexity, which they use in structured, behaviorally complex communication systems that vary tremendously among songbird species. The components of these communication systems are transmitted to succeeding generations by mechanisms both biological and cultural (i.e., by a combination of heredity and learning). Songbird singing is thus a fascinatingly complex, multidimensional trait that arose through the interplay of biological and cultural evolution. The trait as whole, extraordinarily intricate and intimately associated with reproduction, must be an adaptation. But a detailed understanding of exactly how singing affects fitness remains elusive. What processes have driven the evolution of the particular patterns of song production and performance that we observe in songbird species? Which particular features of singing are adaptive?

In practice, answering evolutionary questions about the adaptive value of singing behavior means investigating how songs function in the social lives of songbirds. By determining whether particular aspects of singing confer reproductive advantages on birds that use them, we can infer past and/or current selection. To investigate song function, I take several complementary approaches: 1) careful observation and description of songs
and singing to identify meaningful patterns of variation; 2) searches for correlations between aspects of singing and components of fitness; 3) field experiments to test whether song features correlated with fitness do in fact serve a communicative function that could be selected; and 4) comparative studies to determine whether variability in song features among species is correlated with differences in ecology and life history; such correlations between behavior and environment can reveal adaptation.

One of the main difficulties in assessing the functions of male song features is distinguishing between the features selected for effective mate attraction and those selected for effective management of competition with other males. These two types of communication may require different song properties and singing behaviors, and many song systems may have evolved as compromise solutions to the demands of conflicting functions, making if difficult for investigators to disentangle the evolutionary contributions of the two types of communication. Therefore, my investigation of song function has focused mainly on the wood warblers (Parulidae), a group in which most species have song repertoires divided into two categories: one used mainly for within-sex communication and one used mainly for between-sex communication. Male-directed and female-directed songs have thus been free to evolve independently, and provide a superb opportunity to examine separately the features that have evolved for communication in aggressive contexts and those that have evolved for communication in mating contexts. 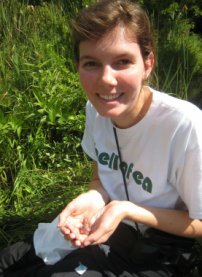 Moseley and the Runt: a baby swamp sparrow in the Quabbin