One of the earliest stages in the creation of biodiversity is the formation of new species (speciation). According to the Biological Species Concept, species consist of population(s) that interbreed and do not interbreed with other such groups. Thus the understanding how reproductive isolating barriers form is critical to our understanding of speciation.

I am particularly interested in the genetics and evolution of postmating reproductive isolating barriers between closely related species. Insects have been and continue to be excellent model systems for addressing these topics. I have worked with two different insect systems, Drosophila and Tribolium (flour beetles), on a number of different topics from fine-scale genetic analysis of hybrid sterility to interspecific sperm precedence to the quantiative genetics of hybrid traits. While my current work is primarily non-experimental, much of it is motivated by results from my previous empirical work. 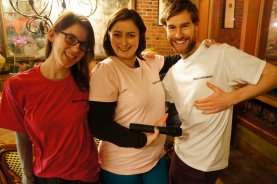