Professor of Biology, University of Massachusetts

Research in our lab resides at the intersection of genes, development and evolution. For reasons of experimental utility and evolutionary richness, our experimental model is the craniofacial skeleton in bony fishes. Broadly speaking, our approach is to integrate studies in a laboratory model (i.e., the zebrafish) and natural populations (e.g., cichlid fishes) to address two general research questions: What are the factors that contribute to jaw morphogenesis? And what are the factors that underlie patterns of natural variation in jaw shape? Ongoing research topics include:

The genetic basis of craniofacial diversity:

African cichlid fishes exhibit unparalleled rates of speciation and diversification. Their evolutionary history is characterized by repeated bursts of trophic specialization, which has led to the evolution of dramatically different head shapes. This unique natural resource provides an outstanding opportunity to identify the genes and regulatory networks that underlie craniofacial diversity. Cichlids are also emerging as a powerful genomic model with a multitude of genetic and genomic resources available to researchers. Ongoing experiments in this system are designed to take full advantage of the evolutionary and experimental potential of cichlids, as we seek to characterize the genetic basis and gene-by-environmental interactions that underlie the development of craniofacial form. Our main prediction is that variability of the craniofacial complex is affected by modular sets of genetic factors operating over discrete periods of development and under different environmental conditions.

Forward genetic mutagenesis screens in zebrafish have provided detailed knowledge of the molecules that regulate early embryonic development. Due to the early lethal phenotypes exhibited by most zebrafish mutants, however, significantly less is known about craniofacial development beyond embryonic stages, including the basis for bone deposition, growth and remodeling. We contend that in order to gain a more comprehensive understanding of these phenomena, traditional embryological techniques should be bolstered by new methodologies including (i) genetic screens targeting later stages of development, (ii) a shift from qualitative to quantitative characterization of defects, and (iii) the continuous monitoring of mutant phenotypes over extended developmental periods. In short, we argue to expand the current genetic paradigm beyond the embryo. Ongoing research in the lab combines mutagenesis screens for bone and tooth phenotypes at later developmental stages, with quantitative shape analyses of skeletal defects. These experiments will introduce a new and powerful method for phenotyping quantitative traits in this important model system, as well as provide novel insights into the molecular regulation of craniofacial development, growth, and remodeling. Based on conserved gene function, these studies are relevant to both evolutionary diversity and human malformations.

The evolution of bone loss in Antarctic icefishes:

Loss of skeletal density (osteopenia) is an increasing health problem as the mean age of populations in developed countries continues to increase. A few species of Antarctic fishes provide a naturally occurring evolutionary model for degenerative bone diseases of old age. Ancestral Antarctic notothenioid species were benthic and lacked a swim bladder, the organ most fishes use to achieve neutral buoyancy. When Antarctica cooled, notothenioids were left to fill pelagic niches vacated by the extinction of other species. This involved the evolution of strategies to become less dense, including loss of bone and decreased bone density. To identify genes responsible for the adaptive evolution of bone loss in Antarctic fishes, which may be orthologous to genes responsible for the maladaptive bone loss in ageing humans, we have begun to compare the molecular genetics of skeletal development in robustly mineralized and osteopenic Antarctic fishes. These experiments will reveal genes whose activities evolved under natural selection for reduced skeletal ossification, and have the potential to expose previously unknown players and new roles for known players in vertebrate ossification. 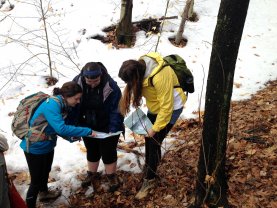 Fusco, Straley, and Navon navigate in the backcountry