I am interested in aquatic ecology, with much of my research centered around fishes. My current PhD research is focused on a group of anadromous fishes known as river herring. As an anadromous fish, river herring spend most of their adult life in the Atlantic Ocean, but migrate each spring into freshwater to spawn. After spawning, adults will migrate back out into the ocean, while newly hatched herring will spend the summer in freshwater growing and developing before migrating into the ocean in late autumn. River herring are a species of great ecological importance because they serve as an essential food source for a wide range of animals from larger fish to birds and seals. Studying river herring has become increasingly important in recent years as over-harvesting and habitat loss have led to massive population declines.

My field research in Wellfeet, MA on Cape Cod investigates the impacts of man-made physical barriers such as dams and road-crossing culverts on the spawning migration of river herring. A tidegate structure at the mouth of my study river serves as a barrier that limits river herring entry into the river. A series of road crossings over the river also introduce delay in their migration to their spawning grounds upstream. Furthermore, there is anecdotal evidence that predators such as striped bass at the tidegates and large snapping turtles at upstream road crossings are utilizing these man-made barriers as choke points to ambush migrating herring. In upcoming years of the study, I hope to measure the influence of predators at these sites, as well as the barriers themselves on herring migration. This work may be able to inform conservation management about restoration opportunities and improve annual estimates of how many adult herring enter the river to spawn. 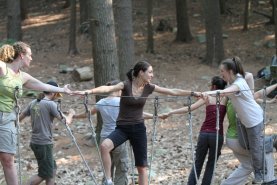 Paradigms and paradoxes in evolutionary biology