A major goal of evolutionary ecology is to understand how ecological interactions such as competition and mutualism shape evolutionary patterns within and between species. I have approached this topic through studies of the role of competition in the evolution of sexual differences within species and the role of mutualism in the coevolution of plants and pollinators. My current research looks at both questions in a hummingbird - Heliconia system in the Lesser Antilles. My past research examined aspects of the hummingbird-pollination syndrome in plants of eastern North America, focusing on jewelweed, Impatiens capensis.

Sexual Dimorphism and Floral Polymorphism in a Hummingbird - Plant Association

Although Charles Darwin hypothesized that some sexual dimorphisms in animals were the result of ecological causation in the form of resource partitioning, little unambiguous evidence exists in support of his hypothesis. My studies of the purple-throated carib hummingbird, Eulampis jugularis, provide strong evidence for Darwin's ecological causation hypothesis by linking sexual differences in trophic morphology to sexual differences in resource use. The purple-throated carib hummingbird exhibits one of the most pronounced sexual dimorphisms in bill size and shape of any avian species. Males are 25% heavier than females, yet bills of females are 20% longer and 40% more curved. My field studies indicate that this sexual dimorphism is maintained by specialization of each sex on one of two species of Heliconia, whose flowers match the size and shape of either the male (H. caribaea) or female (H. bihai) bill. Presently, I am investigating the roles of sexual and natural selection in the maintenance of sexual dimorphism in the purple-throated carib, and the degree to which these hummingbirds drive natural selection in the floral traits of their Heliconia food plants. (To view this system in detail see PBS-Nature Film "Hummingbirds: Magic in the Air", which you can access through the "Links" selection on this website). 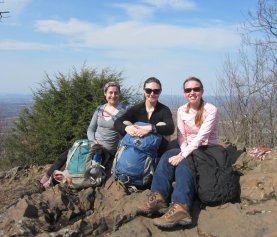 Fusco, Doubleday, and Broadley atop an adaptive peak