Priya Roy Chowdhury studies the mechanisms underlying species’ responses to rapid human-induced environmental changes. She uses a combination of genetic, molecular, and physiological approaches to determine how materials and energy pathways are influenced by temperature and nutrient gradients – two most pressing environmental problems of present time. Specifically she focuses on how organisms deal with long term increase in dietary phosphorus content and increased temperatures at multiple levels of biological hierarchy. She received her PhD degree in Zoology from Oklahoma State University in 2014. During her PhD tenure, she worked with century-old resurrected eggs of Daphnia (water-flea), making it possible to compare ancient population with contemporary populations from the same habitats. Such “time travelling” substantially increased our predictive power in understanding the effects of environmental change at the elemental, genetic, individual, population as well as entire community levels. After her PhD, she joined the Earth and Environment department at Boston University as a postdoctoral fellow. Here, she studied how nitrogen (N) cycling communities and thus N cycling processes are modified by human altered habitats such as oyster farms and how such changes influence sediment fluxes of greenhouse gases such as nitrous oxide. As a Darwin fellow, she will be working with Dr. Kristen DeAngelis on the effect of long-term environmental stress (global warming and nitrogen deposition) on microbial community dynamics. 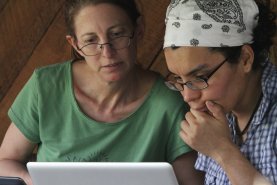