My lab is broadly concerned with experimental, retrospective and computational approaches to molecular evolution. At present, three projects are underway: 1

1.The in vivo experimental re-evolution of an important ribonucleoprotein, RNase P in E. coli. Our approach consist in introducing sythetic versions of the catalytic RNA component of RNase P, which are then allowed to evolve over repeated replication cycles, gradually improving their function and hence organismal fitness.

2. We are interested in evolving novel antimicrobials that reduce the emergence of antibiotic resistance. Specifically, we use in vitro protein engineering to generate novel bacteriocins, which are then tested for activity and further modified to increase their activity, alter their target range, or slow the appearance of resistant strains. (In collaboration with Dr. Margaret Riley, UMass Amherst)

3.We are investigating the genetic dynamics of the seed bank in a weed species, Stellaria media. Using a series of microsatellites we have developed for this project, we are comparing the contributions of the seed bank to standing genetic diversity in disturbed and undisturbed habitats, and using these data to investigate the evolutionary consequences of the seed bank on adaptation and plant plasticity. (In collaboration with Dr. Sonia Sultan, Wesleyan University) 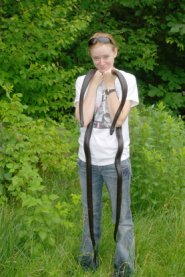