Overview. Cell-cell signaling provides a way for individual bacterial cells to communicate with one another and to coordinate biological processes as a group. The main focus of our research is to understand how the soil bacterium Bacillus subtilis senses and responds to extracellular signaling molecules. We use a combination of systems approaches including genetics, transcriptional profiling, and whole genome DNA binding studies to identify regulatory networks controlled by cell-cell signaling. Biochemical and biophysical approaches are then used to determine the molecular function of regulatory factors and signaling molecules in controlling these physiological processes. Quorum sensing. Individual bacterial cells secrete signaling molecules that are sensed by neighboring cells and serve as cues to coordinate specific responses with population density, a process referred to as quorum sensing. Quorum sensing is important for a variety of physiological processes including: pathogenesis, antibiotic production, horizontal gene transfer, bioluminescence, competence development, and sporulation. In Bacillus subtilis, the transcription factor ComA regulates genes of the quorum response. Two signaling pathways converge to control the activity of ComA by modulating its phosphorylation state (ComX-ComP) and its ability to bind DNA (Rap-Phr) (Fig. 1). The genetic arrangement of the comX-comP signaling cassette and the regulation of ComA by cell-cell signaling have striking similarities to known virulence pathways in pathogens including S. aureus, E. faecalis, and S. pneumoniae. The rap-phr signaling cassette is conserved among different Bacillus species including the pathogens B. anthracis, B. cereus, and B. thuringensis. Thus, studying the mechanisms of ComA regulation and dissecting the regulatory pathways controlled by cell-cell signaling should aid in our general understanding of how bacteria coordinate group behavior. ComA binding to DNA. Our work predicts that ComA binds to DNA in an unusual manner - two dimers of ComA bind to a tri-partite sequence (Fig. 2). All three recognition elements are required for ComA to bind DNA in vitro and for transcription activation by ComA in vivo. The degeneracy of the binding sequence is an important regulatory feature for maintaining the density-dependent response. Using biochemical and biophysical approaches, we are examining this unusual binding architecture to determine how ComA binds DNA to regulate genes of the quorum response. Regulation of ComA activity. Two signaling pathways converge to regulate the activity of ComA by modulating its phosphorylation state and by inhibiting its ability to bind DNA via the Rap proteins (Fig. 1). We are dissecting the regulation of ComA by these external signals to determine their effects on DNA binding and transcription activation. Defining the interplay between ComA phosphorylation and the regulation by Raps should provide a better understanding of how the quorum response is coordinated with population density. Identification of regulatory networks controlled by cell-cell signaling. Our ultimate goal is to map several of the quorum response pathways and to determine the involvement of ComA and co-regulators in controlling gene expression. Many of these pathways are predicted to be controlled directly by ComA, while others are predicted to be controlled indirectly through the action of regulatory factors whose expression is controlled by ComA (e.g., Rap-Phr pairs). Several putative target genes are suspected of requiring co-regulatory factors in addition to ComA. We are using genomic approaches including transcriptional profiling and whole genome binding studies to dissect these regulatory pathways and identify the factors involved in controlling gene expression. Controllable protein degradation systems. An ongoing interest of our laboratory has been in the development of useful tools for studying regulatory networks in B. subtilis. We engineered a controllable protein degradation system that utilizes small C-terminal peptide tags and heterologous adaptor proteins from E. coli and C. crescentus to deliver tagged proteins to the host B. subtilis protease where they are rapidly degraded (Fig. 3). We are currently using this system to study several proteins with unknown function. Given the conservation of bacterial proteases, this protein degradation system has the potential to be modified for use in other bacteria. 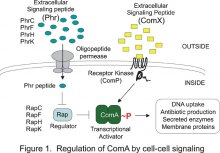 Immune clocks: A right time to vaccinate and to fight infections