John Marshall Clark’s study showing that two-thirds to three-quarters of lice are immune to the effects of many insecticide treatments due to overexposure was recently featured in Scientific American. Read more

S. “Thai” Thayumanavan’s Center for Autonomous Chemistry, an initiative with UMass Lowell and the Medical School, has received $140,000 from the UMass President’s Science & Technology Initiatives Fund toward a project developing the molecular design fundamentals for autonomous chemical systems, inspired by the immune system. The project is one of nine in the five-campus system to receive this grant. Read more 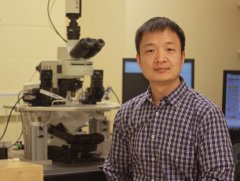 Geng-Lin Li, biology, recently was awarded a five-year, $1.6 million grant by the National Institutes of Health to study auditory signal processing in the inner ear. His findings will expand basic understanding of hearing and could lead to better hearing protection. He says, “Our inner ear can process sensory signals with remarkable precision, but it comes with the cost of vulnerability, making it very easily damaged by noise and by aging. As we advance our basic understanding of hearing and satisfy our curiosity, new approaches could arise, allowing us to design better protection for people who work in a noisy environment.” (Read more...)

Scott Garman was one of five Public Engagement Project fellows to visit the State House May 9 to share research and explore synergies with state representatives, senators and other policy leaders. Read more

Sandra Petersen recently received a two-year, $438,000 exploratory grant from the National Institute of Environmental Health Sciences to further her studies of a little-known gene, CUG RNA-binding protein 2 (CUGBP2), which affects sex-specific development processes in the brain and has been linked to Alzheimer’s disease, neural cell death and reproductive disorders. Read more 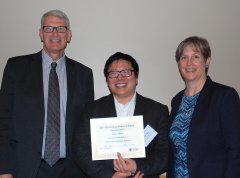 Congratulations to Peter Chien, recipient of the CNS Outstanding Research Award (early career)! Peter's research focuses on protein degradation and unfolding, and protein quality control. He received the award recognizing his research accomplishments at a reception on April 27. Read more

Ana Caicedo is an author on a new paper about a new resequencing analysis of weedy rice (Oryza sativa L.) biotypes illuminates distinct evolutionary paths and outcomes of de-domestication and ferality. This largest effort to date in weedy plant genomics gives a better understanding of weediness while also providing a promising source of alleles for rice breeding.  Read More

Between the folds with the small and mighty: Ligands guiding the folding of proteins in surprising ways

MCB students in the Gierasch and Garman labs at UMass, Amherst, have advanced the understanding of the relationship between protein folding and ligands, very small (~100 daltons in size) molecules which reside in the cell. Ligands were found to guide much larger molecules in the folding process, by recent MCB Alumnus, Karan Hingorani. Misfolded proteins are often the cause of disease, and the findings, by Hingorani, and confirmed by current MCB Program students, Mathew Metcalf and Derrick Deming have important implications in new therapies and pharmacological treatments of disease. Read more

Clash of the titans: how ticks navigate bloodmeal hosts and their microbes for survival

Precision targeting of the gut microbiota: Cancer and beyond