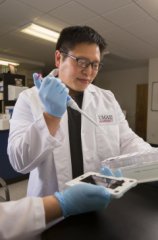 The American Academy of Microbiology (AAM) recently honored Peter Chien, professor in biochemistry and molecular biology, by naming him to the 2020 class of Fellows of the Academy, based on his record of “scientific achievement and original contributions that have advanced microbiology.” The AAM is the honored leadership group within the American Society of Microbiology (ASM), one of the oldest and largest scientific societies in the world.

Chien says of the honor, “This recognition from the AAM reflects the cumulative work of the amazing group of students and trainees in my lab. I am thankful for all the work this team put into our science, and humbled by the recognition for our efforts." Read more 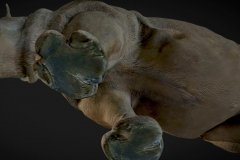 The Digital Life Project at the University of Massachusetts Amherst has been revolutionary in creating visual records of critically endangered species in ways that technology has never allowed before.

The project team modeled the first-ever 3D image of a southern right whale after researchers used aerial photography and drone videos to measure the mass and volume of whales. Previously, the only way to weigh any whale was by using a dead or stranded animal. Using its innovative Beastcam array, the team has also produced the world’s first accurate 3D image of the southern white rhino.

Led by Professor of Biology Duncan Irschick, the Digital Life Project has gathered a number of global collaborators. Documenting southern right whales as they gathered at their winter breeding grounds off the coast of Argentina involved participants from the Southern Right Whale Health Monitoring Program and the Aarhus Institute of Advanced Studies in Denmark. To create the visual of a rare southern white rhino, Irschick and team collaborated with the Perth Zoo in Australia, which volunteered its resident rhino, Bakari, to be photographed.  Read More

Archit Rastogi received the Irwin Fridovich YIA Award for one of the top two scored abstracts/presentations at Society for Redox Biology and Medicine Conference in November. These awards were made available to students and postdoctoral fellows based on a submitted abstract and the presentation of the work at the annual meeting, either in oral or poster symposia. Fifteen awards at $500 each and one Undergraduate Award at $200 were presented at the SfRBM 2019 Awards Banquet in Las Vegas. Archit works in the Timme-Laragy lab, and his talk title was "Pancreatic Nrf2 expression and organ morphogenesis is altered by Glutathione modulation in the Developing Zebrafish (Danio rerio) Embryo." Read more 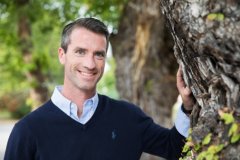 Intellectual freedom and the opportunity to start his own research group once lured Robert Daniels (PhD, Hebert Lab) to Stockholm University and the Department of Biochemistry and Biophysics. After nine years of eminent academic research, he landed a prestigious job in the US. Still, his focus is the same: to apply basic membrane protein folding principles to modernize and improve the antigens in seasonal influenza vaccines.

During his sojourn at Stockholm University, Robert Daniels became Associate Professor at the Department of Biochemistry and Biophysics. He also built an international reputation as a distinguished influenza researcher. Since June 2019, Robert Daniels has been the principal investigator for a group that studies influenza viruses at the Center for Biologics Evaluation and Research within the US Food and Drug Administration (FDA) – a US government agency that regulates therapeutics including vaccines. Read more 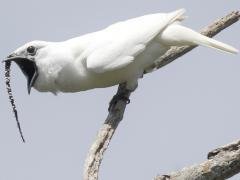 Biologist Jeff Podos at the University of Massachusetts Amherst, with Mario Cohn-Haft at the Instituto Nacional de Pesquisas da Amazônia, Brazil, report that they have recorded the loudest bird calls ever documented, made by dove-sized male white bellbirds as part of their mating rituals in the mountains of the northern Amazon. Details are in the latest Current Biology. Read more

Biology and Art: The UMCA launches a collaboration with the Natural History Collections in October 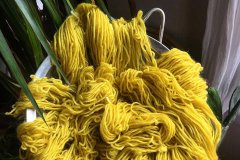 One of the exciting happenings on the UMass Amherst campus this fall is a seed of something huge to come: an innovative collaboration between the University Museum of Contemporary Art (UMCA) and the Natural History Collections. The pilot project for this partnership, ongoing through 2020/21, is Fielding, a show by guest artist Emily Tareila ’19G (MFA), mounted in pop-up fashion in Morrill Science Center. In a time of global environmental shifts, the methodical catalog of species that natural history collections furnish is a particularly valuable resource. “The collections are the foundation of a lot of biological research, documenting and recording life on earth, for scientists to study in terms of what has happened, and what’s coming,” says Assistant Professor of Biology, Madelaine Bartlett. “We have a legacy of herbarium records that can now be used to track the impact of climate change.” Read more 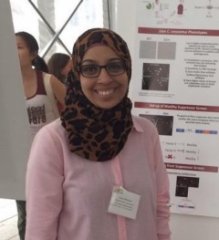 Molecular and cellular biology doctoral student Samar Mahmoud was recently named a Gilliam Mentor Training Fellow by the Howard Hughes Medical Institute (HHMI), an award that will support her early scientific career in the lab of Peter Chien, biochemistry and molecular biology. She will receive funds for a stipend and education costs, while Chien will embark on a year of mentor training from HHMI. The goal is to improve faculty mentoring skills, support new scientific leaders and foster diversity and inclusion in science, the institute points out.

Mahmoud and Chien are one of 44 advisor student pairs awarded the coveted fellowship in 2019. Read more 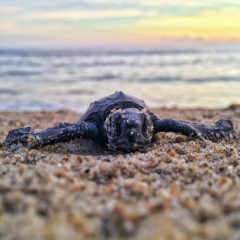 The National Science Foundation this month announced that Lisa Komoroske, environmental conservation, will co-lead a four-year, $1.4 million, multi-institution grant to study how reproductive behaviors will influence the effects of climate change on green sea turtles (Chelonia mydas).  Her team will spend months in the field at turtle nesting beaches on Fernando de Noronha, a marine reserve and UNESCO World Heritage Site composed of an archipelago of 21 islands about 220 miles off the coast of Brazil. She and collaborators at Florida State and Oregon State universities will also work with the Brazil-based non-profit conservation organization PROJECTO TAMAR on the project. Read More

Environment Plays a Role in the Physical Toll on Migrating Birds 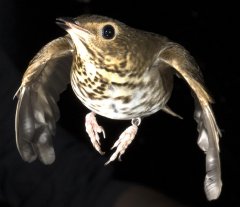 Ornithology researchers Alexander Gerson and his postdoctoral research associate Derrick Groom at the University of Massachusetts Amherst, with others, compared the short-term effects of resting vs. long duration flight on the rate of lean body mass loss in birds. They found that the total quantity and rate of protein loss was not different in the two conditions, but both were affected by ambient humidity. Read More 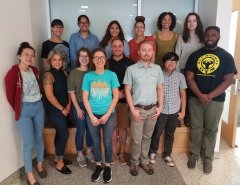