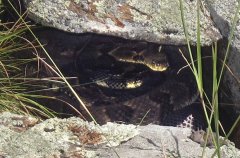 OEB Ph.D. candidate Anne Stengle, is overseeing a federal grant in nine states that studies a mysterious fungus killing snakes in the Northeast. In less than a decade, the fungus has been identified in at least nine Eastern states, and although it affects a number of species, it's especially threatening to rattlesnakes that live in small, isolated populations with little genetic diversity, such as those found in Vermont, New Hampshire, Massachusetts and New York. According to Stengle, the fungus has been found in all five rattlesnake populations in Massachusetts, but it doesn't appear to have had the high mortality rate reported elsewhere. Stengle's dissertation research is on habitat selection, connectivity and viability of the timber rattlesnake metapopulation in southwestern Massachusetts.

Evan Palmer-Young, OEB doctoral candidate in Lynn Adler's lab, has been awarded a $20,735 Doctoral Dissertation Improvement Grant from NSF's DEB for his project "Inter-strain variation and evolution of resistance to phytochemicals in the bumblebee trypanosome parasite, Crithidia bombi." Congratulations to Evan and Lynn!

OEB Ph.D. Candidate Caroline Curtis has been awarded a NASA Earth and Space Science Fellowship for her proposal Using Time Series of Remotely Sensed Imagery to Understand Invasive Pine Dispersal. The $30,000 fellowship, renewable for up to three years, allows Curtis to study the temporal patterns of pine invasion in South America. Congratulations to Caroline and her advisor, Bethany Bradley.

NSB student Amanda Cremone (Spencer lab) received a travel award from the University of Massachusetts Center for Research on Families (CRF).  CRF provided funding to Amanda to present Influence of a Mid-Day Nap on Response Inhibition in Preschool-Aged Children at the Society for Research in Child Development’s conference in Philadelphia.

NSB student Janna Mantua (Spencer lab) is a recipient of a Sleep Research Society Abstract Merit Based Award. This award is based on the scientific merit of the abstract that she submitted for presentation at SLEEP 2015, the 29th Annual Meeting of the Associated Professional Sleep Societies that will be held June 6-10, 2015 in Seattle, WA. Janna received a Meritorius Award of $500.  Congratulations to Janna!

Andy Smith, OEB doctoral candidate in Betsy Dumont's lab, has been awarded a $20,131 Doctoral Dissertation Improvement Grant from NSF's DEB for his project "The role of integration in driving the morphological diversity of mammalian jaws." Congratulations to Andy and Betsy!

Structure Mechanisms and Drug Discovery in Alzheimer’s and Cancer